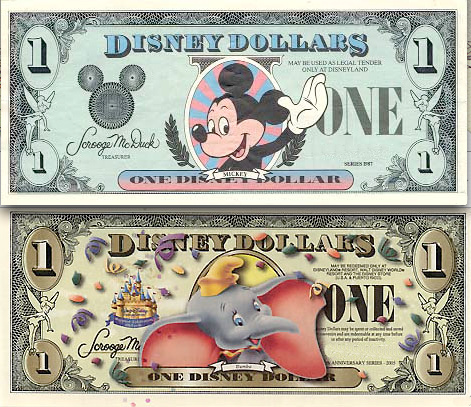 By r reeves (Disney Dollars – then and now) [CC BY 2.0 (http://creativecommons.org/licenses/by/2.0)], via Wikimedia Commons

As it was announced in the middle of May, Disney Dollars are officially out of circulation. The reasoning came to be that gift cards and regular cash were much easier and more practical for patrons to use.

Disney Dollars started in 1987 as a fun way to represent the magical worlds that are Disneyland and Disney World, with Disney’s favorite characters, such as Mickey Mouse and Donald Duck. These dollars are worth the exact amount as dollars in U.S. currency, so their purpose can be seen as unnecessary, but to others, they are a fun and more reasonably priced souvenir for children to keep in their bedrooms or put in a scrapbook as a memory of their time spent in the theme park.

For collectors, though, this discontinuation can be a good thing. As long as the Disney Dollars could be traded in at parks the same way a regular dollar was, they weren’t worth much money. Now that there is no way for park patrons to get Disney Dollars, their value may go up to those willing to sell the blast from the past money to people who want to collect each value or character. As of now, Disney Dollars are selling on eBay for about five times their original value.

Do you have any Disney money from trips to the parks that you are saving? If so, what are you planning to do with it? Keep it or sell it one day? Let us know in a comment!